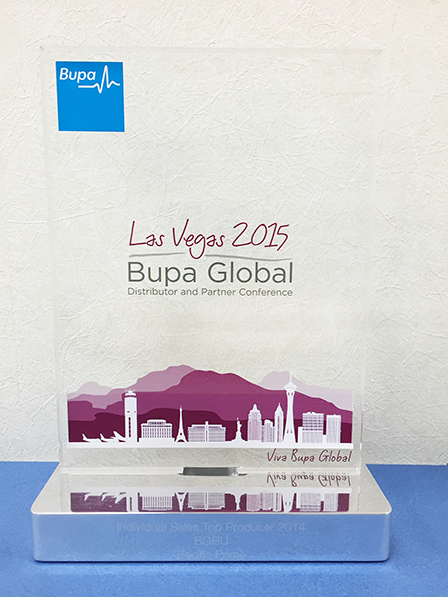 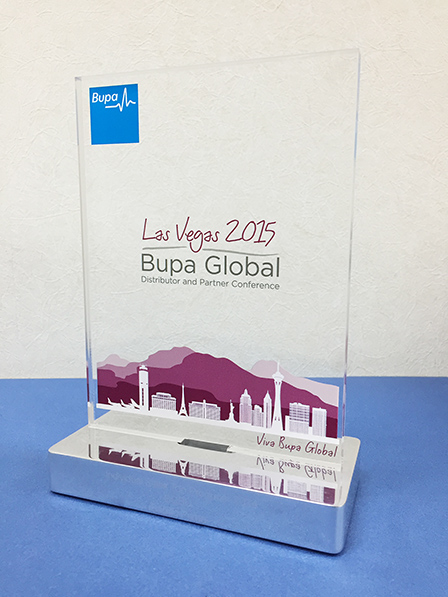 Pacific Prime is proud to announce that, for the third year in a row, Bupa Global has awarded Pacific Prime with top honors. This year, the company was presented with the Individual Sales Top Producer 2014 award. Of the 5,000+ agents worldwide, Pacific Prime was selected for this prestigious achievement which was presented by Bupa Global’s Managing Director Robert Lang, at the annual ceremony held in Las Vegas, Nevada.

Upon receiving the award, Neil Raymond, MD at Pacific Prime, commented, “As a company, we have had a strong and successful relationship with Bupa Global. Throughout our long partnership, we have found that Bupa Global has been working hard to continually improve customer service and plans. This strong commitment to both our clients and the industry means that they are always an insurer we consider when helping our clients find the best coverage available.”

For more than 11 years, Pacific Prime has worked with Bupa Global, and has since been named both its top global distributor and individual sales top producer. This is a reflection of the continued development of the relationship between Bupa Global and Pacific Prime.

Rainbow Pan, General Manager, Bupa Global Greater China commented “Pacific Prime are hugely deserving winners of the Bupa Global Individual Sales Top Producer 2014 award. Their team has delivered excellent service for their customers in individual plans as well as group policies. Bupa Global is proud to call them partners and we’re delighted to name them one of our top producers for a third successive year”.

On 2015 and the future, Raymond commented, “We are increasingly on the lookout for insurers we can trust. Despite the seemingly shrinking market - since 2013 several international insurers have pulled out of the market - there are a number of quality providers out there like Bupa Global who have not only strong portfolios but also plans customers can rely on. We are keen to see what the coming year brings for both companies and competing for their top individual distributor award next year!”

If you would like to learn more about Pacific Prime and how we can help you find the best health plan, contact us today.

Our health insurance advisors will ensure that you get exactly the cover you need.
Give Us a Call
2019 Health Plan Costs