Pacific Prime has released our annual International Private Medical Insurance inflation (IPMI) report, which covers medical inflation seen in 2015. Here, Pacific Prime reviews the past year’s inflationary performance for multiple countries and insurance providers, and looks at what can be expected in the coming year.

Please Note: Pacific Prime has published an updated version of the report on January 8, 2016, to reflect an error that has been corrected. In the origional report it was noted that the top three five-year average companies were:

This is incorrect. The report has been updated to reflect the correct ranking which is as follows:

We appologize for this error.

This year, the report (available now on our website) found that the average percentage increase of international medical insurance plans was 9.2%, a significant difference from the 7.1% increase seen in 2014. Global medical insurance inflation has repeatedly stayed close to 5% higher than Global Consumer Price inflation, and that it remains this year indicates a correlation between the two.

Attributing factors that have been previously identified continue to influence the global health insurance market, the most influential being the rising cost of healthcare, which has, according to the Global Medical Trend Rate Survey Report 2015 published by Aon Hewitt in 2015, inflated by 10.15% in 2015. 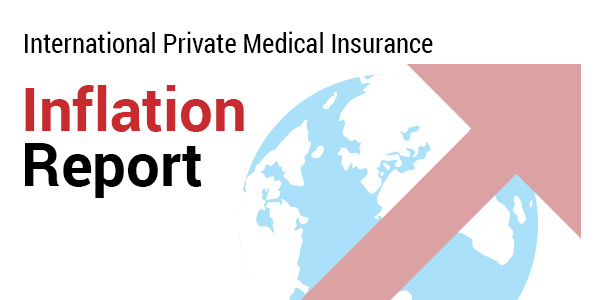 There are four main drivers that we are highlighting this year to explain the reasons behind inflation:

The IPMI market saw a number of changes in late 2014 and 2015 which have subsequently contributed to IPMI inflation. Some noteworthy points for 2015 include: