Expatriates in Asia continue to benefit from the opportunity to work abroad, and understanding that market as an insurance intermediary requires a close inspection of the trends regarding new expats in a selected number of countries.

Although appearing relatively low when compared to some countries (the UAE has 5.4 million expatriates), it is relevant to note that Hong Kong is geographically small with a population of 7.1 million people, making the total percentage of expats in the city a more substantial 4.24%. Excluding Bahrain, Kuwait, Oman, and Qatar who due to small populations have slightly skewed numbers, Hong Kong is placed 7th in the world for percentage of total population constituting expats. Singapore has an ever higher amount of expats contributing to their population, reaching third in the world for total percentage at 13.4%.

In Hong Kong’s case, the projected trend between the 2013 record and a 2017 estimate is a further increase of 7%. This additional 7% would bring the total expat community in Hong Kong to an expected 395.000, keeping the position as one of the most common locations for expatriates to reside in the world. In 2012, Hong Kong work visas issued to UK citizens increased by 45 per cent from the previous year, the highest recorded increase ever. Most expatriates around Asia actually originate from neighbouring countries from Southeast Asia. In Hong Kong for example, Indonesians contribute the largest amount making up 26.3% of the total expat percentage, while Filipinos constitute 18.3% and China 14%.

Change in Quality of Life

One report offered valuable insight into British expats abroad, the global Quality of Life Index from the 'Centre for Future Studies'. It examined British expatriate opinions on 12 countries, measuring attitudes on lifestyle, employment and financial status over seven years. From 2008, each country is ranked based on the responses given by participants: 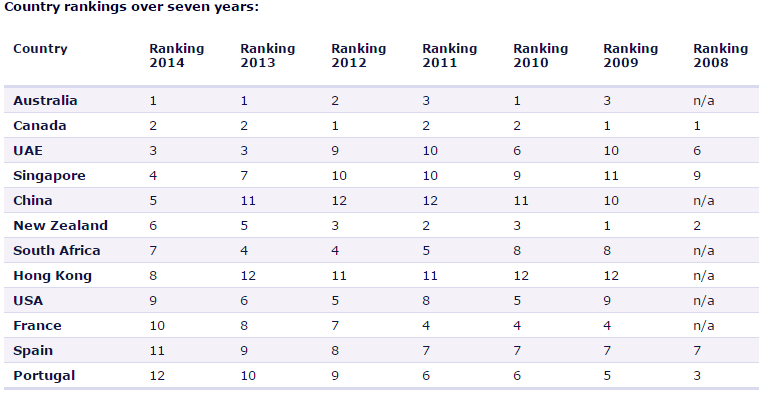 2014 saw Hong Kong rising considerably in the rankings, having only secured 11th and 12th positions in the previous 5 years, settling higher this year at 8th. A similar yet more significant jump were the opinions held about China as a destination to live, which saw over the seven years the highest score increase on the Index. China’s mean score in 2013 was 58.5, and by 2014 there was an increase of 27% to a mean score of 74.8. 71% of the expats surveyed relocated to China for the job prospects, the majority confirming that they earned more than they did in the UK, also citing friendly local culture,  infrastructure, food, and health opportunities as factors for remaining in the country.

Although China held the record for the largest jump in score rankings, the final 2014 Index showed Singapore as the most highly valued country in Asia amongst UK expats. Reasons for maintaining an expat life in Singapore was to raise children through the excellent childcare and education, and the opportunities aimed at career driven individuals and families.

According to the Cost of Living survey released by ECA International, Hong Kong is now the tenth most expensive city (in the Asia Pacific region) to live in as an expatriate. Just ahead in ninth is Singapore, who take the 26th most expensive location for expatriates globally. Malaysia too climbed notably in the global rankings, with Kuala Lumpur 29 places higher than it’s previous position. Shanghai and Beijing take much higher positions at 3rd and 4th respectively.

With rising costs and the increase in proportion of expats working in Asia either as individuals or corporate transferees, (higher than the average for the rest of the world) expats have maintained their status as targets for international brokers who are actively looking for comprehensive health insurance. Expats will carry on associating rising health costs with the standards of living that they enjoy, and to keep up with potentially pricey private treatment costs, the demand for affordable and useful health cover will continue. In some cases, this cover becomes increasingly attractive to individuals who necessarily travel due to work, or those who return to their home countries often. The transferable nature of the majority of expat health insurance plans available (cover that does not end after moving to a different country) have been a crucial aspect when deciding on the most valuable premiums, down to the nature of expatriates being forced to relocate regularly.

Key countries in Asia continue to attract strong global talent within their markets, and the resulting growth in demand for expat health insurance in Asia has been contributing to the overall state of the global market, which has seen an increasing rate of high net worth individuals looking to live abroad.

If you have recently become an expatriate who now lives in Asia and is interested in hearing more about what kind of health cover you can find, talk to us today and we'll find you the best insurance for your personal needs.

Worldwide
from $54
Find Others
Insurers
The World's Finest Insurers