Dubai saw insurance premiums for international private medical insurance (IPMI) rise by an average of 9.5% in 2015, a slight jump over 2014's average inflation of 7.2%. Inflation in Dubai is quite interesting, especially when comparing IPMI inflation to Consumer Price Inflation of 2.50% as of March 2015. Essentially, Consumer Price Inflation remained near 0% from 2009-2013 and has risen only in the past three years to where it is today, meanwhile IPMI inflation appears to be largely influenced by, and follows, global IPMI trends.

In 2014's report we noted that Dubai had finally recovered from the 2008 global recession while increased competition had been the major contributors to last the price change. These stay true for this year: Dubai's economy has seen steady recovery and competition in the IPMI market is growing.

The one major factor that can be tied to this year's increase however is the adoption and increased compliance requirements of mandatory health insurance policies for all workers entering Dubai. Combine this with a growing population as well as demand for quality healthcare and we have seen a higher demand for insurance which has led to the increased premiums. 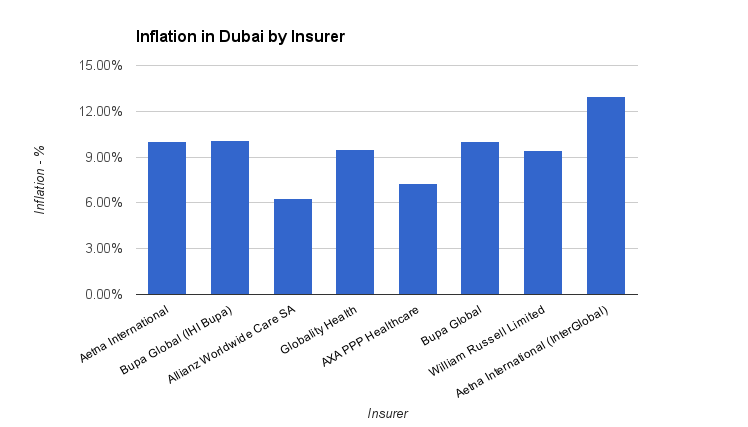 Looking at the inflation by insurer in Dubai for 2015 you can see that figures ranged from just over 6% (6.3%) to 13%, with some seeing inflation figures more than 3% above or below the average for Dubai (9.5%).

Pacific Prime predicts that the inflation next year will be higher than this year's figures - likely into the double digits. The main reason for this is because the DHA has mandated that all insurance plans in Dubai cover pre-existing conditions. This will lead to much, much higher IPMI inflation in the near future.