Welcome to the 2015 edition of Pacific Prime's International Private Medical Insurance (IPMI) Inflation report. This year we are excited to launch a new, easily digestible layout for the report which encompasses a more modern digital style. While the layout has changed, we have kept the same insurance providers, plans, countries, and regions used in last year's report - which can be viewed here.

This report analyzes the changes of the most popular plans offered by eight insurance providers of varying size. Each of these eight plans are offered in the ten locations that are the most popular - in Pacific Prime's experience - for IPMI insurance, and are grouped into three regions - Asia, the Middle East, and the Rest of the World (excluding the USA and Canada).

Also, all figures are measured by numerical averages and are not weighted either year-on-year, or by insurance company size. 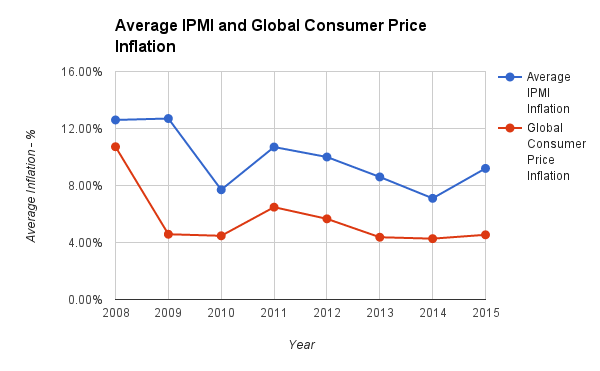 The chart above shows the average global IPMI increase each year from 2008 onwards. The average percentage increase of all plans in 2015 is 9.2%, up from the 7.1% increase seen in 2014. When compared to the Global Consumer Price Inflation of 4.5%, IPMI is close to 5% higher. This highlights one of the report's most intriguing findings: Global IPMI inflation is consistently around 5% higher than the Global Consumer Price inflation. This indicates a strong correlation between the two types of inflation.

This report has been written with the main assumption that IPMI inflation is influenced by the cost of healthcare. According to the Healthcare Trends Institute, around US 82 cents of every USD 1.0 spent on insurance premiums in the US are used to cover hospital fees, doctor's wages, and medicine. Globally, this is certainly true for corporate plans, but in Pacific Prime's experience this figure is about 10% less for individual premiums.

These reports, which highlight global medical trends (the cost of medical care) show that healthcare inflation figures are usually within 1% of IPMI inflation. For example, healthcare cost inflation for 2013, and 2014 were 7.9% and 8.3% (according to the Towers-Watson survey). The Aon Hewitt report put medical cost inflation at 10.15% in 2015. In the same years, IPMI inflation was 8.6%, 7.1%, and 9.2% respectively.