Pacific Prime has created an in-depth analysis of the results from the 2016 Cost of International Health Insurance Report. This year, our analysis focuses on three major results:

If you were to exclude the USA and Canada from the results in this year’s report, it is quite apparent that many of the top ranked locations are also major expat destinations. In almost all of these destinations, Pacific Prime has seen an increase in the demand for quality international care, or care comparable to that of an expat’s home country, that may not necessarily be available in that country.

Take for example China, which consistently ranks in the top 3 or 4 in 2016’s report. In recent years we have seen some important changes and issues raised that directly point to an increased demand for better quality care. For example, in 2014 the Chinese government allowed wholly owned foreign hospitals in some cities in order to meet the projected 11%+ increase in healthcare expenditure and increased demand. While this program is still in its infancy, reports note that there is considerable interest from foreign markets, and new hospitals are currently being planned. We predict that with an ever growing middle to upper class in China, these hospitals will prove to be incredibly popular, as they will offer a level of health care quality sorely needed in parts of the country. 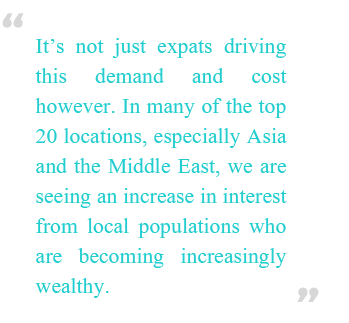 It’s not just expats driving this demand and cost however. In many of the top 20 locations, especially Asia and the Middle East, we are seeing an increase in interest from local populations who are becoming increasingly wealthy. Countries like China, Dubai, Hong Kong, Singapore, and even parts of South America are seeing a rise of the so-called “mass affluence” who are on par, and in many cases past the earning potential of traditionally defined expats and are driving demand for better quality health care and insurance to cover it.

For example, the public health care systems in many of the countries included in this report are reportedly drastically overburdened. From overworked staff to increasing wait times, poor management practices, outright corruption and sheer overcapacity, there is a strong push by the increasingly affluent middle and upper-class locals for better care. This is especially prevalent in China, Dubai, and Hong Kong, where Pacific Prime has seen a marked increase in the percentage of locals requesting international coverage.

This is corroborated by our Individual Private Medical Insurance Inflation report, which found that the major driver behind premium inflation is in fact the cost of health care. 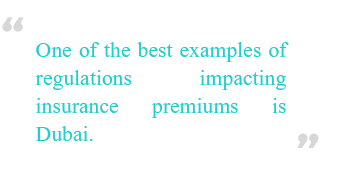 One of the best examples of regulations impacting insurance premiums in Dubai. Other countries like China are not necessarily implementing mandatory insurance, but have implemented increasing regulations around who can sell what plans, and the types of plans on offer. For example, in China only insurers approved by the China Insurance Regulatory Insurance Commission are legally allowed to sell plans in the country.

These regulations can have an impact on not only the premiums offered, but also the cost of plans, especially if all plans are required to cover certain things like pre-existing conditions or maternity, both of which are incredibly costly. Beyond that, many of the countries with increasing regulation e.g., Singapore, Dubai, and China, also have capital requirements that insurers must be able to meet before they can sell in those countries. This can potentially limit insurers to offering higher cost plans in order to cover the capital requirements.

Fraud is an ongoing problem found in every country, and while it can come in many different forms, it is often found that health care fraud (which includes fraud directly related to health insurance) is the most common. For example, Health Care and Business Tech found that in the USA the number of fraudulent healthcare claims submitted is considerably higher than any other type of claim.

While the vast majority of countries, healthcare facilities, and insurers are implementing measures to curb this increase, it is proving hard to manage for many. While there are different types of healthcare fraud aside from submitting false claims, they all have an impact on health insurance that will need to be dealt with by insurers.

All insurers have fraud units that work with hospitals, doctors, clinics, and even patients to reduce fraudulent claims. While insurers have noted some success, fraud will continue to impact premiums. Simply put, if fraud goes up, one of the main strategies insurers have to combat it is to raise premiums.