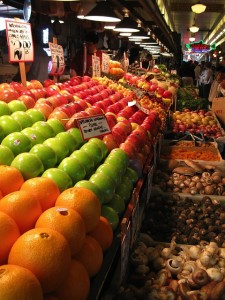 Finding it impossible to shed the belly bulge? With many of us hitting the gym in earnest following the holiday season, we take a look at what your diet and lifestyle might be saying about you, and finding that appearances can be deceptive.

We’re living longer and WHO figures show that overall blood pressure and cholesterol rates have, in fact, dropped over the last 30 years. But BMI and ‘fasting glucose’ levels have increased; both factors in chronic, non-communicable diseases such as diabetes, respiratory and cardiovascular disease. In fact non-communicable disease is estimated to account for a staggering 87% of all deaths in the United States according to WHO data.

As other nations develop, the statistics bear out this all too familiar pattern and it’s clear that modern diets and lifestyles lie at the core of the problems where chronic disease is concerned. The mantra is that we are bombarded with convenience and junk food, lead increasingly stressful lives and don’t take enough exercise. It’s almost as overwhelming as the wealth of information thrown at us in the hope of changing these habits and diets, and sometimes only leads us to disconnect completely.

Many of us simply feel that these statistics do not impact us directly, and whilst many would agree individually that their own diets and lifestyle choices are far from ‘perfect’, it’s clear that, collectively, the message is being diluted and many people simply do not relate these figures to their own figures.

So what does your diet say about you? Dr Robert Kushner, Clinical Director of the Northwestern Clinical Comprehensive Center on Obesity in Chicago, has famously condensed his many years of research and expertise with overweight patients to formulate a dietary regime based around distinct personality types. His book ‘Dr. Kushner’s Personality Type Diet’ has been lauded by nutritionists and the public, and offers an alternative to the ‘one size fits all’ approach to diet and lifestyle choices.

His findings show that there are many types of ‘unhealthy’ eaters and each type is categorised by distinct psychological traits and behaviours, rather than a simple lack of willpower. The ‘Deprived Sneaker’, for instance, enjoys a diet which consists largely of “good” and “healthy” foods, particularly ‘in public’, but constantly feels deprived and so has a tendency to binge on ‘bad’ foods in private. The ‘Hearty Portioner’, meanwhile, was brought up to clean their plate and not waste food. These types tend to eat quickly, and feel like a glutton afterwards. The guilt makes them feel powerless and the cycle is hard to break. Busy Moms may relate to the ‘Unguided Grazer’; picking at food throughout the day that is convenient and accessible, but never stopping to eat a balanced, healthy meal. These types tend to be distracted when they do eat and consequently aren’t getting the right kind of nutrients and may end up consuming too many calories, salt and fat.

It’s clear that lifestyle choices and a person’s psychology are inextricably linked. A recent study published in ‘Health Psychology’ looked at the correlation between personality traits, dietary patterns and BMI. The study: ‘The associations between personality, diet and body mass index in older people’ used the ‘Five-Factor Model’ and concluded that: ‘Personality traits, especially Openness, are associated with dietary patterns in older age. The pattern of findings may indicate that, in older people, dietary habits may be less related to how ‘controlled’ they are and more
related to their levels of ‘openness’ and emotional and social adjustment.’

These findings are echoed in those of another recent study, from Melbourne University. Professor Deborah Cobb-Clark, Director of the Melbourne Institute of Applied Economic and Social Research said those who have a greater faith in ‘luck’ or ‘fate’, are more likely to live an unhealthy life. “Our research shows a direct link between the type of personality a person has and a healthy lifestyle,“ she said. “Understanding the psychological underpinning of a person’s eating patterns and exercise habits is central to understanding obesity.”

What is also clear is that poor diet and lifestyle choices are not merely the domain of those of us who are overweight. There is a common misconception that being thin equates to being healthy, and whilst conventional wisdom purports a high BMI to be a fair indicator of potential health problems, those with a low BMI may also be at risk.

Experts now agree that BMI alone is not necessarily the best indicator to determine these risks, but rather waist circumference, in conjunction with waist-to-hip ratio, are more reliable indicators, as BMI doesn’t take into account muscle. Waist circumference, on the other hand, measures belly fat and indicates how fat is distributed across the body. This is important, since people who tend to accumulate fat around their belly (as opposed to their hips and legs) are more likely to develop not only diabetes, but also heart disease. Cheering news perhaps for those of us who
may be naturally pear-shaped.

A Yale study found that “women with greater abdominal fat had more negative moods and higher levels of life stress,” said Elissa S. Epel, Ph.D., lead investigator on the study at Yale’s psychology department. “Greater exposure to life stress or psychological vulnerability to stress may explain their enhanced cortisol reactivity. In turn, their cortisol exposure may have led them to accumulate greater abdominal fat.”

Cortisol ‘the stress hormone’ affects fat distribution by causing fat to be stored centrally-around the organs. Crucially, the study showed that lean women with abdominal fat consistently secreted more cortisol in lab tests, compared to women with peripheral fat. “It is possible that greater exposure to stressful conditions or psychological vulnerability to stress has led them to overreact to stressors in their daily lives, so they have had greater lifetime exposure to cortisol,” Epel said. “Cortisol, in turn may have caused them to accumulate abdominal fat. Genetics,
however, also play a role in shaping reactivity to stress, as well as body shape.”

A huge study conducted by researchers at Addenbrooke’s Hospital, in the UK, measured the waist size and BMI of about 30,000 middle-aged Europeans and followed them for up to 17 years. People, who at the start of the study were ‘merely’ overweight, but also had a large waist (defined as 40 inches for a man and 35 inches for a woman) were more likely than obese people with normal or moderately large waists to develop type 2 diabetes.

At the 10-year mark, 7% and 4.4% of overweight men and women with large waists had developed diabetes, respectively. By contrast, the corresponding figures among obese men and women with moderately large waists were just 4.9% and 2.7%. When the researchers analyzed the three-way links between diabetes, waist size, and BMI, they found that diabetes risk was more closely associated with waist size than with BMI.

There are important ramifications of diet upon reproductive function too. Harvard researchers conducted a study of some 18,000 women in ‘The Nurse’s Health Study’; a long term research project which looked at the effect of diet and lifestyle on chronic and noncommunicable disease. The study found, contrary to conventional wisdom, that women in the group with a high carb intake (who got more than 60% of their calories from carbs) actually ate less fat, drank less alcohol and coffee, and ate more plant protein and fiber than the low carb group (those who only got 42% of their calories from carbs). Interestingly, women in the high carb group weighed less, weren’t as likely to smoke and were more physically active. What this shows is that a high carb diet doesn’t necessarily equate to bad for your health. Bread lovers everywhere, however, should consider the rest of the findings.

It was found that the instances of ovulatory infertility (as opposed to, say, a blockage) were found to be about the same in both groups. The crucial difference was the type of carbohydrates consumed, with ‘fast carbs’ (e.g. white bread and potatoes) upping the ‘glycemic load’ i.e. how quickly the carbohydrate is turned to blood sugar. Women in the highest glycemic-load category were a staggering 92 percent more likely to have had ovulatory infertility than women in the lowest category.

The conclusions are clear. A healthy diet is not necessarily to be equated with being merely ‘thin’, and there is much evidence to support the ‘good carb, bad carb’ theory, and so rather than focusing on diets such as Atkins, which eliminate entire food groups, we should instead be looking to eliminate foods across the spectrum which contribute to a higher ‘glycemic load’, both for health and fertility. Furthermore, we need to take into account the psychology underpinning our dietary and lifestyle choices, and use this to empower ourselves in a way which begins with a healthy acceptance of our own bodies, whatever shape and size that may be, and in taking the time to understand what works individually for us.