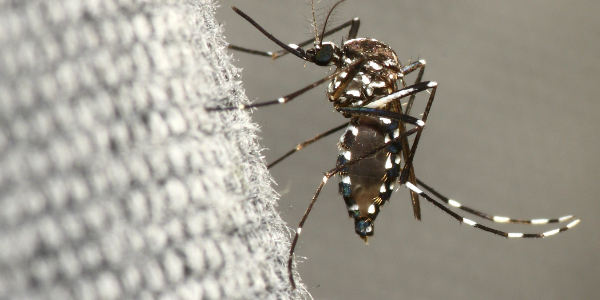 Recently, numerous diseases have been in the news in Asia. Of these, the most reported on all have one thing in common: They are transmitted by mosquitoes. From the scary new Zika virus that seems to be spreading to Asia rapidly from South America to the ever-present Dengue fever, which appears to be on the rise in South East Asia, there are a number of diseases you could be exposed to while in the region.

Due to the seriousness of many of these diseases, according to publications including the Smithsonian, “The diseases that mosquitoes carry and transmit to people they bite kill 725,000.” This makes the mosquito the single most deadly animal in the world. Over the past few months, Pacific Prime’s offices in Shanghai, Hong Kong, Singapore and even the UAE have fielded a number of questions about mosquito-borne illnesses. To help we have created this short overview of the top five mosquito-borne diseases and insurance.

If you’re heading to a country rife with mosquitoes, it’s especially important to protect yourself with insurance. See a quick overview of your travel health insurance options in the video below!

Zika virus is arguably the most talked about disease in recent months; receiving press all around the globe and evidence that transmission is spreading in different countries. This virus, commonly referred to as Zika fever, was actually first discovered in 1947 in Africa, with the first major outbreak not happening until 2007. Despite the spread of the disease, it did not receive much coverage in the news until last year when an outbreak in Brazil was linked to microcephaly. While this has not been fully proven, the WHO notes that “Agencies investigating the Zika outbreaks are finding an increasing body of evidence about the link between Zika virus and microcephaly.”

To top it off, countries with a recorded Zika fever outbreak have also recorded a potential link between the fever and Guillain-Barré Syndrome (GBS) – a rare sickness where the body’s immune system attacks the nerve cells, causing weakness and sometime paralysis. As the CDC reports, “The Brazil Ministry of Health has reported an increased number of people who have been infected with Zika virus who also have GBS.”

While GBS and microcephaly are worrying, it is important to note here that the links between Zika fever and these illnesses are not fully understood. Many disease specialists are recommending care being taken should you live in a region where Zika is known the be present. This is especially true for pregnant women, as it is known that Zika can be transmitted from mother to fetus.

It is also important to know the signs and symptoms of Zika fever which include:

According to the WHO, “The incubation period (the time from exposure to symptoms) of Zika virus disease is not clear, but is likely to be a few days…These symptoms are usually mild and last for 2-7 days.” In other words, there is not a great chance that you will be hospitalized should you contract it.

Because of the fact that there is no known vaccine, it would be advisable to take precautions to prevent the disease. We cover the most common ones below, but it would also be a good idea to keep an eye on where the disease has been reported. While the outbreak is largely concentrated in South and Central America, there have been recorded outbreaks (in the past) and cases in South East Asia. Visit the CDC’s Areas with Zika page to learn more.

While Zika virus is receiving a large amount of news coverage at the moment, there is a mosquito-born illness that many disease control experts would consider to be substantially larger: Dengue and Dengue Hemorrhagic Fever, or Severe Dengue.

Like Zika, Dengue is thought to have originated in Africa and remained mostly limited to the region until around World War II, when cases started to be recorded outside of Africa. Now, Dengue fever is considered to be endemic in over 100 countries – basically any tropical or subtropical location – which translates to about ⅓-½ of the world’s population being at risk, and it is on the rise. According to the WHO, “Cases across the Americas, South-East Asia and Western Pacific exceeded 1.2 million in 2008 and over 3 million in 2013.”

In recent months there has been news of an outbreak in Singapore (which Pacific Prime Singapore covered in a recent article), an increase in cases in Hong Kong, and even an ongoing outbreak in Hawaii that has caused the state to declare a state of emergency.

Due to the increasing number of cases, it is important to be aware of the symptoms of Dengue which include:

Unfortunately, like Zika fever, there is no approved vaccine for Dengue, but for most people the symptoms will be mild. Doctors will usually prescribe painkillers and rest, with recovery usually happening within a week. The problem with Dengue, however, is that a small percentage of cases where Dengue is more severe – an illness referred to as Dengue Hemorrhagic Fever.

As the CDC notes, “Dengue hemorrhagic fever is characterized by a fever that lasts from 2 to 7 days, with general signs and symptoms consistent with dengue fever. When the fever declines, symptoms including persistent vomiting, severe abdominal pain, and difficulty breathing may develop.” In some cases where care is not received in time, this can lead to circulatory failure and death. According to the WHO, “An estimated 500 000 people with severe dengue require hospitalization each year, a large proportion of who are children. About 2.5% of those affected die.”

Much like the two disease above, Yellow fever is a serious mosquito-borne illness that is common in certain parts of the world. Unlike Dengue however, yellow fever is not as widely spread, only present in parts of Africa and South America. The WHO has found that, “There are an estimated 200,000 cases of yellow fever, causing 30,000 deaths worldwide each year, with 90% occurring in Africa.”

Unlike the two illnesses above, there actually is a vaccine for yellow fever which has proven to be incredibly successful. That being said, it is still a concern in some regions, so if you plan to travel to Africa or parts of South America you should be aware of the symptoms which are broken down into two stages.

Toxic yellow fever symptoms which become present usually 24 hours after the end of the first stage and include:

If the toxic stage is reached around half of all patients will die within 14 days. This makes it a considerably more serious illness than some others, so it is important that you receive a yellow fever vaccine before visiting endemic countries (which can be found on the CDC’s yellow fever page)

Chikungunya, like the other mosquito-borne illnesses in this article, was first discovered in Africa. Unlike yellow fever, however, this illness has become much more widespread, with local transmission recorded in Europe, the Americas (North, Central, and South), Asia, Africa, and the Pacific.

While not as common as Dengue, cases are still reported in various countries in the region. For example, Singapore confirmed 42 cases in 2015. This makes it an important disease to know the symptoms of. These symptoms include:

While similar in symptoms to dengue, Chikungunya is usually accompanied by more severe joint pain that, in some cases, can last weeks. Similar to the other diseases on this list, there is no known vaccine for Chikungunya, but as the WHO explains, “Serious complications are not common, but in older people, the disease can contribute to the cause of death. Often symptoms in infected individuals are mild and the infection may go unrecognized, or be misdiagnosed in areas where dengue occurs.”

Finally, we have malaria. The most widespread and studied of the mosquito-borne illnesses. Caused by the plasmodium, it is estimated that nearly half of the world’s population is at risk of contracting malaria. According to the latest WHO estimates, released in December 2015, there were 214 million cases of malaria in 2015, and 438,000 deaths. While the number of cases has decreased nearly 37% between 2000 and 2015, it is still a serious disease.

Because it is present in much of Asia, Africa, and even Europe and the Americas, it could help to be aware of the symptoms of malaria which include:

While not dangerous at first, if left untreated it could become severe malaria with symptoms that could include:

Any of these symptoms are considered to be an extreme medical emergency, and will be treated as such. Luckily, many strains of malaria have been well studied and doctors are generally able to use anti-malarial drugs to cure most cases.

The one key thing about the diseases included above is that they can all be prevented. While some, like yellow fever and malaria, have drugs or vaccines, others don’t, so it is best to take preventative measures which include:

Will health insurance cover these diseases?

With many of the diseases in this article, your insurance will cover it. Recovery in a short time is often possible, which means that visits to the doctor will not be overly costly and should be covered by your insurance. If there are complications, however, you may need to seek costly medical care. It would be beneficial to ensure that you have a plan with higher limits that can cover any potential care required from mosquito-borne illnesses. To learn more about your health insurance options, contact our experts.

The Top 7 Health and Safety Tips for Backpackers
How to Out-Health Your Heroes: Be Fitter, Stronger and Tougher Than The Hulk
Health Hacks: 5 Simple Tricks for Vibrant Health

Latest posts by Jess (see all)

Jessica Lindeman is a Content Strategist at Pacific Prime. She comes to work every day living and breathing the motto of "simplifying insurance", and injects her unbridled enthusiasm for health and insurance related topics into every article and piece of content she creates for Pacific Prime.