How Does the Lone Ranger Stay Safe in the Sun? 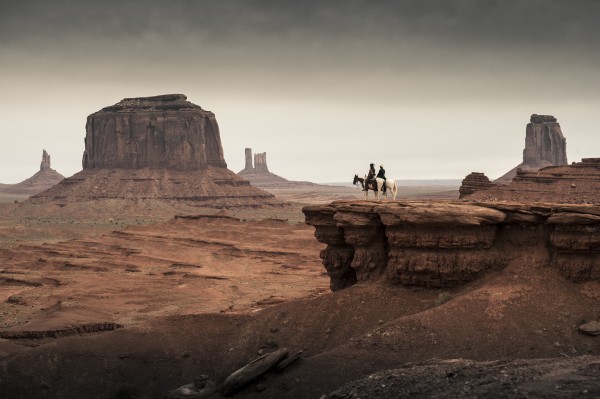 Having seen the trailer for “The Lone Ranger,” with all the shots of scorched skin in the blazing sun, I must say that I am a little concerned about the masked outlaw’s health.

As we all know, too much exposure to the sun can lead to a variety of ailments such as sunburn, heat stroke, cataracts, dehydration and skin cancer.

Here’s a reminder of some of the best ways to stay protected in the sun this summer; let’s see how well the Lone Ranger fares.

When picking out a pair of shades, make sure that you find a pair with 99 percent UVA and UVB protection. Wearing sunglasses without proper UV protection is actually more harmful for your eyes than not wearing any at all; the tinted lenses allow your eyes to open up, exposing them to more sunlight. As a rule of thumb, if a pair of sunglasses is significantly cheaper than the rest, it’ll probably harm your eyes more than it’ll protect them.

As for the Lone Ranger, while sunglasses were technically available in 1869, they were not actually used to shield your eyes from the sun: people at the time were unaware of the harmful effects of the sun on the eyes. Sunglasses as we know them today did not become common until the early to mid 20th century. So don’t be surprised if in a few years, the masked outlaw starts mistaking Tonto for his horse.

Use the Right Sunscreen

When choosing sunscreen, it’s very important to be aware of the sun protection factor, or SPF. The level of SPF needed depends on how long you intend to stay in the sun; the higher the SPF, the longer you’ll be protected. As with sunglasses, look for sunscreen with both UVA and UVB protection. Also, make sure to avoid sunscreen containing a form of vitamin A called retinyl palmitate, as studies have suggested that it actually increases the chances of developing skin cancer.

Unfortunately for the Lone Ranger, sunscreen wasn’t invented until the early 20th century. Even though he covers up quite well, even going as far to wear a mask that shields a significant portion of his face, the Lone Ranger still runs risks. When applying sunscreen, it’s important to apply it to all exposed areas. And although Tonto sports a nice coat of face paint, this isn’t an adequate substitute for sunscreen.

Cover Up (wear a hat)

Finally, something the Lone Ranger has gotten right! And while it’s not necessary to wear a hat quite that big, wearing a hat will provide a natural source of shade for your head, leaving you feeling cooler. Baseball hats are not the best option as they leave the ears and the back of the neck exposed. The recommended size of hat is one with a 3-inch brim all the way around.

As for the rest of the body, choose loose fitting clothing, which will allow air to circulate better. Avoid wearing darker colours, which absorb heat. Instead, opt for lighter coloured clothing, which reflects heat. Check tags to see if your clothing offer SPF protection as well.

Limit Exposure to the Sun

One of the simplest ways to stay protected from the sun is to simply avoid being exposed to it. UV is generally at its highest levels during the hours of 10 a.m. to 4 p.m., so perhaps reconsider what time of day you choose to go sun tanning. Also, make an effort to find shade when hanging around in widely exposed areas.

The Lone Ranger gets a free pass on this one: criminals and bandits aren’t always going to wait till after dark to rob a train.

Making sure to stay hydrated is especially important on a hot summer day. The amount of water you need to drink goes hand in hand with how much you’re perspiring. So if you’re sweating bullets in the sun, it’s probably time to drink up. Stay away from sugary drinks, such as soda or juices, as too much sugar consumption can actually dehydrate you. Alcohol will also cause dehydration. If you’re planning on ordering a couple of cocktails under the summer sun, be sure to take in plenty of water as well.

Why is the cost of health insurance in the Americas increasing?
Everything you ever wanted to know about Movember
Following the Journey: Peking to Paris Race Part 1