The famous vintage car race has entered its final week, and as proud sponsors, we take a look at Car 38’s progress and how Michelle Jana Chan and Mike Reeves coped as they were put through their paces in Russia.

Russia is the largest country in the world, so it’s a good thing the team were in high spirits as they had a long way to go! As they entered the vast country, the team tweeted, “Day 13. Shiner causing a stir in Russia. So much support. Thumbs up and cheers from roadside. Everyone snapping with their camera phones.” 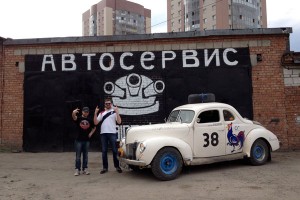 As the team entered Novosibirsk, Russia, it was evident that Shiner needed some TLC and the team had to stop in a garage to get her fixed up. They updated their Twitter later, “Day 14. Drained old oil. New oil and pressure restored. Cut bigger wheel arches. Changed sparks. Changed shocks (again). Tightened handbrake”. The team have now been racing for 2 weeks and Shiner’s been going non-stop. We’re not surprised that she needed some work!

The next day proved to be difficult and Shiner suffered from a flat tyre and a flat battery. The team finally got back on the road though and enjoyed some smooth, level tarmac as they entered Omsk, Russia. However, that night, Shiner needed yet more work and no rest was to be had for the team. On the bright side, Michelle and Mike learnt that they placed 5th in the race and continued in this spot for day 16 too.

Unfortunately, tragedy struck as teams learnt a fellow competitor had been killed on the rally in Siberia. Competitors were left shocked and saddened by this news, and Michelle shared her reflections on the crash with The Telegraph. Despite the devastating news, the race had to continue and so the team powered through, tweeting “The spirit of the rally is rising again… always with the memory of Emma”. 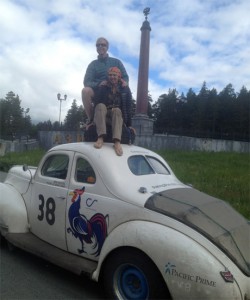 Michelle and Mike were lucky enough to pass the famous monument which marks the boundary between Europe and Asia, pictured above. By day 18, the team were making great progress and shared it on their Twitter profile: “Day driving through Urals region. Lots of impatient trucks overtaking carelessly en route, ah me. Arrived in Ufa”. Almost half way through Russia and the team steadily remained in 5th place all the while edging closer to the rest of Europe on the map.

The next couple of days were full of ups and downs. The good news is that the team managed to climb to 4th place on the leaderboards. The bad news is that they got pulled over by the police (luckily, they just wanted to know more about the car) and Shiner had some trouble requiring work on her engine and tyres. By the time they hit Saratov, Russia on day 21, they were officially in 3rd place. Great news for the team, but poor Shiner took more hits and the team posted an unfortunate update on Facebook, “Lots of electrical problems including no cooling fan on a day the temperature was in the high 30s. Poor Shiner. Hot and bothered.” They continued to sit steadily in third place as they left Russia and entered Ukraine, pictured above. Day 24 of the race is possibly one of their best days as the sun was out, they drive through some lovely countryside in Kiev, Ukraine and Shiner ran smoothly, or “like a dream” Michelle wrote in one of her updates.

The next day, Michelle may have been retracting her words as Shiner took a turn for the worst and ended up in the garage being patched up once again. The team posted an update on Shiner’s progress via Facebook, “Changed oil. Fixed windows. Played with our jets. Switched off-road tyres for on-road tyres. Driving back from the garage the clutch pedal failed. Argh!”. By the looks of things, these mishaps are becoming fairly normal as Michelle and Mike get straight back into the race the next day and enter Lviv, Ukraine. Out of the race, they still placed a steady third, but a new competition emerged as announcements were made that, “European Trophy will crown the fastest cars from Kiev to Paris”, and Shiner was leading the vintage class.

After a quick brake fix in Kosice on day 27, the team entered Slovakia the next day. Michelle and Mike, unfortunately, lost their place in the European Trophy, “What can I say? Clutch. Gearbox. Rain. Perspiration. Tears. It was hard. It was wet. A 45min penalty was enough to do us in.”. However, good news as they’re still going strong in third place in the whole race. To learn more about the race, check out a useful video here. You can continue to track the teams progress on their blog and don’t forget to check back at the results to see what position Car 38 is in! Check back soon for the third and final update of the Peking to Paris race, as the team head to the finish line in Paris.